The Baby Boom Supply Shock to the System

I think that more and more investors, economists, and policy makers are beginning to understand and accept that we have another supply shock to work through - and it's a big one.

The 1970's stagflation, caused largely by the OPEC created oil supply shock, was effectively artificial in terms of its creation.

A combination of aggressive monetary policy courtesy of the Paul Volker-led Federal Reserve, and an increase in the oil supply resulting from more domestic drilling led the US economy to get back on a growth trajectory with a disinflationary backdrop after just a few years.

I contend that this will not be the case with today's stagflationary environment.

The current labor supply shock is largely demographically driven and has been a long time in the making. Covid wasn't the cause, but certainly served as an accelerant.

Retirement related declines in the labor force became noteworthy beginning around 2012 when the first of the baby boomers started turning 65 at a rate of approximately 10,000 per day in the US. The pace of boomers turning 65 has picked up over the last decade, now pacing at roughly 12,000 per day. 📈

As you can see from the chart below, we are currently at the peak of boomers turning 65 and that level will persist for a number of years before starting to decline around the end of decade.

That's a lot of folks leaving the workforce.

In my opinion, we as a society must deal with this dynamic head on, by aggressively investing in productivity enhancing technology as well as policies that will encourage aging workers to remain in the labor force longer.

Until then, I expect to see continued upward pressure on labor costs as the workforce continues to age and to age-out. 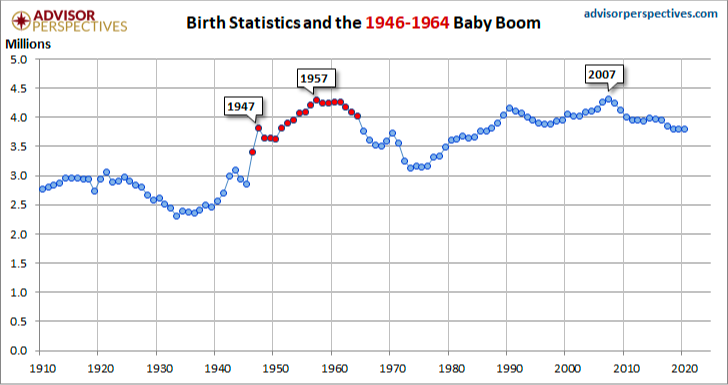