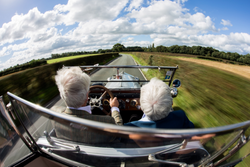 Let's take it easy and enjoy this Holiday edition of our leisurely Sunday Drive around the internet.

Okay...so we started hearing Christmas music around here right after Halloween. (too soon!). I struggled to decide whether or not to subject you to even more holiday music. But then I found this for the Vibe of the Week and just couldn't resist. I hope you enjoy it.

"The ability to do what you want, when you want, with who you want, for as long as you want to, pays the highest dividend that exists in finance." - Morgan Housel

🎄  Bonus Quote for the Holidays‌

"May this season find you among those you love, sharing in the twin glories of generosity and gratitude." - Oprah Winfrey

📈  Chart of the Week

🇨🇦 Canadians are generally considered to be reasonably frugal folks. Some would also say they can be notoriously poor tippers at bars and restaurants - at least when they visit the U.S.

So, I found this chart pretty interesting in that, on average, they spend more on Christmas than any other country. 🤷🏼‍♂️

🤔  Unlearning the Macroeconomic Lessons of the 2010s - Market crashes don’t always crash the real economy. The all-important question of how finance affects the real economy. There were two big financial events in 2007-8, not just one — a crash in housing prices, and a banking crisis that began with the failure of Bear Stearns and Lehman Brothers. They happened at the same time, so it was hard to separate the effect of one from the effect of the other. Which was the true “financial crisis” here?

💡  The Middle Class Is Dead. Long Live the Long Tail Class - A networked, creative economy cannot produce a normal distribution of income. Our focus should shift to providing a minimum-viable lifestyle to a growing long-tail class. Cities have a critical role to play in that process.

🤓  The 2022 Stratechery Year in Review - From technology strategist, Ben Thompson

The biggest story in tech not just this year but, I would argue, since the advent of mobile and cloud computing, was the emergence of Artificial Intelligence. AI looms large not simply in terms of products, but also its connection to the semiconductor industry; that means the impact is not only a question of technology and society, but also geopolitics and, potentially, war. War, meanwhile, came to Europe, while inflation came to the world; tech valuations collapsed and the crypto bubble burst, and brought to light one of the largest frauds in history. All of this was discussed on Twitter, even as Twitter itself came to dominate the conversation, thanks to its purchase by Elon Musk.

If you have any cool articles or ideas that might be interesting for future Sunday Drive-by's, please send them along or tweet 'em at me.

‌I wish you and yours peace and joy this Christmas Season. See you next Sunday...

If you enjoy the Sunday Drive, I'd be honored if you'd share it with others.‌‌

If this was forwarded to you, please subscribe and join the other geniuses who are reading this newsletter.